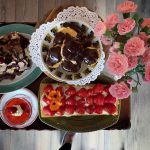 The starting point was the dessert trolley.

What followed was weeks of arguing over the details and dishes that would make for a night aiming to capture an era when going out for your supper really was a bit special.

Tempting as it was to produce a truly authentic 10 page 80’s menu with hundreds of dishes ‘From the land’, ‘From the sea ‘ etc, choices had to be made. After much debate, we ended up with a menu including  Garlic Mushrooms (with the sauce of a Thousand Islands), deep fried brie, Steak Diane, Chicken Cordon Bleu and a vegetarian ‘Surprise’. 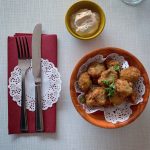 Even though several speeches were made on behalf of Melon fans, Chicken Kievs, Racks of lamb and orange juice (as a starter), these classics failed to make the final cut.

As mentioned, the star of the night was the trolley which featured a Strawberry flan, black forest roulade, profiteroles and a bowl of raspberry jelly with Chantilly cream.  We were also keen to include a Bailey’s cheesecake, an arctic roll and a knickerbocker glory but our moderate sized trolley was starting to buckle under the pressure. Now that’s what I call an Eighties dinner party Part 2 is already being discussed. 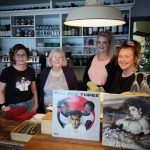 Music similarly presented choices for the night.. Our only collective memory of eighties restaurant music was ‘The magic Richard Clayderman’ and Phil Coulter’s ‘Sea of tranquillity’, which magically came in the post when you decided to open a  restaurant.

We ignored this inconvenient truth for the night in favour of putting together a playlist with all our faves including Prince, Squeeze, The Style Council and Prefab Sprout.

Thanks to everyone who came to our night of retro fun. We hope you enjoyed the food and the tunes.

Is it too soon to start talking about the nineties?