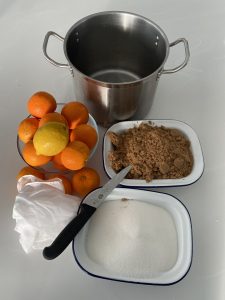 The proper homemade version takes a bit of a time but is so much better than the factory made stuff that it really is worth the effort. It’s unique flavour comes form the deliciously tangy Seville oranges which are only around for a few weeks just after Christmas each year.   There’s a dizzying amount of recipes out there and much debate on wether or not to ‘cut first’ or ‘boil first’ when approaching the hands on task of slicing the peel. We  like this version from Felicity Cloake which follows tradition and starts with juicing the fruit and then slicing the peel pre boil. Controversially, the recipe also includes light muscovado sugar which gives a noticeably darker colour rather than just using plain sugar.

It’s very handy to have a sugar or digital kitchen thermometer for getting the setting point right. Jam makers with more experience then myself seem to easily gauge the setting point using the saucer and freezer method, but i think the thermometer takes the guess work out of it.You should be taking the marmalade off between 104 and 105 C, which most agree is the ideal setting point for marmalade. Hold your nerve and don’t be tempted to take it off before this .

1. Juice all the oranges oranges and lemon in half and squeeze the juice into the pan, but use a sieve or similar to save all the pith and seeds.

2. Put your piece of muslin into a bowl and spoon the pips and pith into it. Shred your peel to desired thickness and add any more flesh or loose pith to the muslin.  Put the peel into the pan with juice ,  and tie the muslin bag up tightly and add that too. Pour over 2.5l of water, bring to the boil and then simmer gently for 2 hours. The peel should be soft.

3. Remove the muslin bag and allow to cool in a bowl. Wait until it’s cool enough to handle the bag for squeezing , or if you want to come back and fish the marmalade much later, then turn off  the pan and  come back later. Meanwhile, sterilise your jars by giving them a wash and drying in the oven. If using the ‘saucer’ method to test setting point, put them in freezer now.

4. Bring the marmalade back to a simmer, and squeeze the muslin bag hard into it Stir in the gloopy juice that comes form bag , add the sugars and stir well until dissolved.

5  Turn the heat up and boil rapidly until the marmalade reaches setting point – a sugar thermometer will be helpful here (start checking when it reaches 104C) . You can check this by putting a spoon of marmalade onto one of the plates from the freezer . Put the plate back in fridge for another minute with marmalade and if it crinkles when you run a finger through it, and your finger leaves a clear line in the preserve, it’s ready. Give it 5 more minutes if it’s not ready.

6. Once done, let it rest for 15 minutes, and then pour into jars and seal immediately 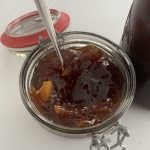