From this week, you’ll be able to pick up a bag of Cafe Rua dinner & dessert on a Friday afternoon and enjoy some of our favourite Cafe dishes in the comfort of your own home.

We first heard about the ‘HEAT@HOME’ idea during the last lockdown when our friends at BROWNE’S in Tuam provided a wonderful service every weekend by chilling some of their wonderful Bistro style dishes and accompanied them with easy instructions for heating at home. We loved the idea and at a time when we can’t host our own customers at Cafe Rua, we hope that we can provide a similar service for them. 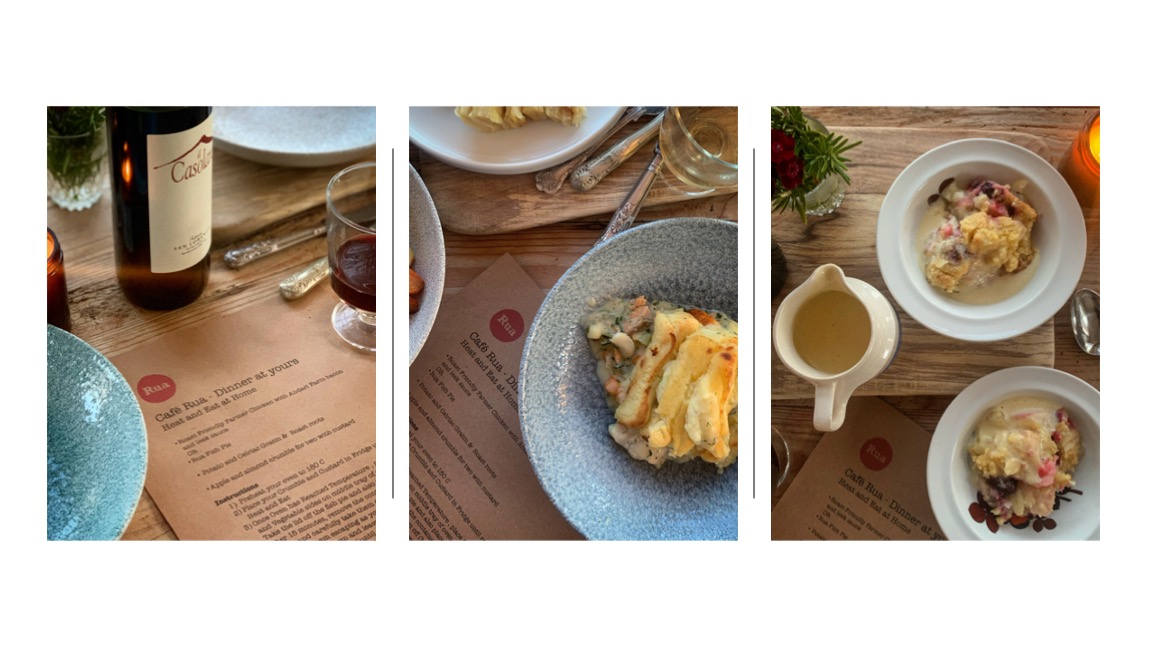 For now, we are doing Friday collections only. Ordering is available each week from Sunday evening until midnight on Wednesday, unless we sell out before then. Our menu has an option of 2 mains, and 2 desserts and is priced at €23 per person. We also have an option for a bottle of our house wines, both of which are organic.

The menu changes each week, and we’re keeping it simple to start. We hope to add other day availability and menu choices as we develop the idea. We are happy to take orders over the phone on 094 9023376 from 9am – 4pm each day, but you can also order online HERE.

Our first menu launches on Monday 19th October and has main choices of Roast Irish Chicken with a tarragon, onion and mushroom gravy or a lovely Cafe Rua Fish pie, with sides of potato and celeriac gratin, plus roast roots with some wild garlic butter. Dessert this week is our bread and butter pudding with custard or a raspberry ripple panna cotta. 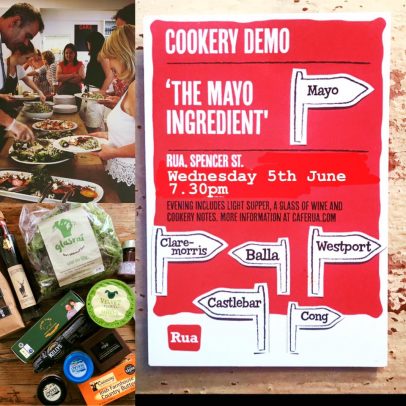 Both demos will include recipes featuring wonderful local produce from the likes of Velvet Cloud (yogurt and cheese), Achill Sea Salt, Gerry Hasset’s smoked fish, Kelly’s puddings, vegetables from Glasraí, eggs from Claremorris and much more.

At the first of the demos on Wednesday June 5th, we’ll be visited by Breda from Cuinneog Dairy and making some fruit soda bread, ice cream and a salad dressing using their wonderful buttermilk.

At our demo on Tuesday 18th, we will be joined by Fiontann from Wildwood Vinegars, and very much look forward to sampling some of his amazing bottled wild flavours. 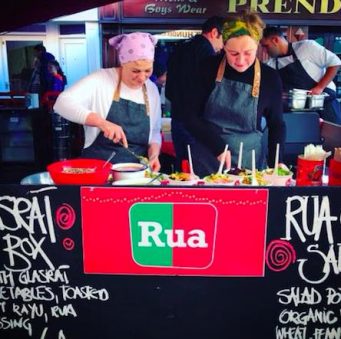 This latter demo is a fundraiser for the ‘Mayo Street Food Festival’, a wonderful one day event and gathering of local restaurants and producers to be held this year at Bridge Lane, Castlebar on Sunday, September 8th. In the lead up to the big day, the county town’s leading food and drink ambassadors are teaming up to host a series of exciting food events to raise much-needed funds for the festival. Events on the food series calendar between now and September will include this food demo but also foraging, a wine evening, food quiz, comedy bingo, and more yet to be announced. If you or your company would like to get involved and support the Mayo food scene by becoming a festival or event sponsor, please get in touch by emailing mayo.street.food.fest@gmail.com. 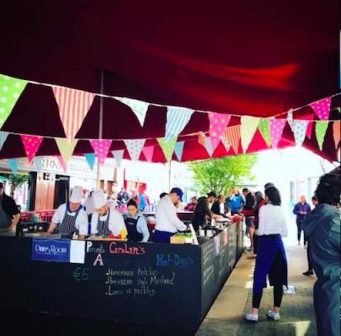 Both of our demo evenings include supper, a glass of wine and notes from the demonstration. Limited tickets priced at €35 must be bought in advance for each evening are available by calling our delicatessen on 094 9286072. Demo starts at 7.30 pm.

Our demo on the 18th is a fundraiser for Mayo Street Food Festival, which takes place in Castlebar on Sunday 8th September. 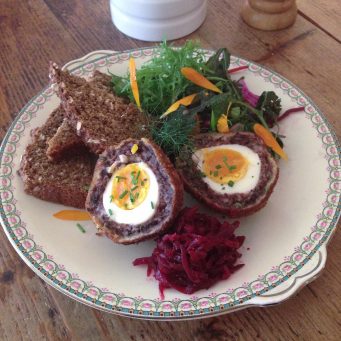 Here’s the recipe for our Mayo version of a Scotch Egg.

We feature it as a a special in New Antrim Street and it recently won best in Connacht in a competition entitled ‘Eggs for Anytime’ run by Bord Bia. 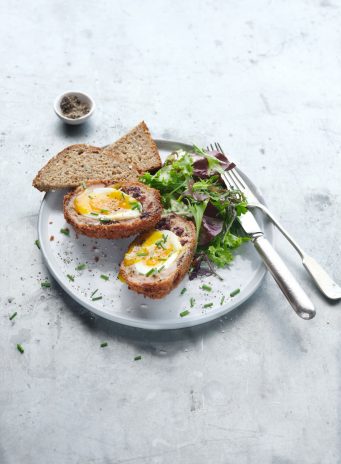 1. Put four of the eggs into a saucepan, cover with cold water and bring to the boil. Turn down the heat and simmer for five minutes, then put straight into a large bowl of iced water for at least 10 minutes.

2. Put the meat, pudding, herbs, and mustard into a bowl – you’ll need to add very little seasoning, as the sausage meat will already contain salt. Mix well with your hands. Divide into four.

4. Beat the two raw eggs together in a bowl with a splash of milk. Put the flour in a second bowl and season it with salt and pepper, then tip the breadcrumbs into a third bowl. Arrange in an assembly line.

5. Lightly flour an egg, pat out some meat mix on a lightly floured board and carefully encase the egg in it. Repeat the process for all the eggs. Dip each meat-covered egg in flour, then egg wash, then breadcrumbs.

6. Fill a deep saucepan pan a third full of vegetable oil, and heat to 170°C (or when a crumb of bread sizzles and turns golden, but does not burn, when dropped in it). Keep the heat under the oil moderate throughout cooking, so the crumbs achieve nice dark golden colour, yet the meat is cooked thoroughly. Cook the eggs, a couple at a time, for eight minutes, until crisp and golden, then drain on kitchen paper before serving.

7. Serve with mixed leaves and some brown bread.